WIPs Conversation: Fred Skolnik on His Work in Progress 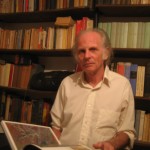 Fred Skolnik was born in New York City and has lived in Israel since 1963, working mostly as an editor and translator. He is best known as the editor in chief of the 22-volume second edition of the Encyclopaedia Judaica, winner of the 2007 Dartmouth Medal and hailed as a landmark achievement by the Library Journal. Other award-winning projects with which he has been associated include The New Encyclopedia of Judaism (co-editor, 2002) and the 3-volume Encyclopedia of Jewish Life Before and During the Holocaust (senior editor, 2001). Now writing full time, he has published dozens of stories, essays and poems in the past few years (in TriQuarterly, Gargoyle, The MacGuffin, Minnetonka Review, Los Angeles Review, Prism Review, Words & Images, Literary House Review, Underground Voices, Third Coast, Polluto, etc.). His novel The Other Shore (Aqueous Books, 2011), set in Israel in the 1980s, is an epic work depicting Israeli society at a critical juncture in its recent history.

Fred, Things Unsaid, your novel-in-progress, is an ambitious undertaking. It’s a literary time travel of sorts, bringing Virgil’s Aeneid into the present period. What was the source of your inspiration?

After I completed my first novel, The Other Shore (Aqueous Books, 2011), I went back to two uncompleted, thematically related earlier novels that I had been working on for years, called Basic Forms and Death, and managed to finish them (both are now making the rounds of publishers, with an excerpt of the former appearing in Sententia 3). I now felt the need to write another, broader novel picking up the same themes again, and as Basic Forms and Death both had a mythological underpinning (Oedipus in the first, though more in the Freudian sense, and Theseus in the second), I felt committed to the form and began looking for an appropriate framework, finding myself drawn to the Aeneid, which gave me everything I needed in the way of a narrative and a structure upon which I could impose my own. I was also aware of course that Joyce had used the Odyssey in much the same way as I thought to use the Aeneid, and therefore my novel also plays itself off against Joyce’s Ulysses occasionally. In fact, Virgil himself used the Odyssey as a model and has a number of parallel sections.

END_OF_DOCUMENT_TOKEN_TO_BE_REPLACED

Fred Skolnik: The Story of A. (from Things Unsaid, a Work in Progress)

When A. was a child he dreamed of being a hero. In that time and that place many children dreamed of being heroes. The idea had always been in the air, so to speak. No one could say where it had come from but it had left its mark on history and on the secret lives of defeated men. When he lay in his little bed watching the shadows on the wall or listening to the sounds of the night A. imagined himself rescuing damsels in distress who were small children like himself or performing daring deeds in the games played by boys and men. A great war had been fought but A. did not remember it. It was before the time when the past began to shape his dreams. He remembered only a few moments that would remain in him like debris floating through space until they came to attach themselves to the system of memories that formed the core of his life. He remembered first the shadows on the wall that evoked the mysteries of the night and then the lazy, distant drone of a plane high overhead in the cloudless summer sky and the rain falling in the yellow circle of the streetlamp on the corner of his street. These memories would create vast constellations moving in a space as big as all the universe, infinite like his imagination, shining with the light of a thousand trillion suns.

He did not construct his dreams out of empty air. The world supplied the materials out of which his dreams were made. It had always been like that. He learned the stories told of heroic men, warriors and conquerors admired by women and the weak, men who conquered worlds and dazzled crowds and scaled the highest mountains. These were the heroes who inspired him. He played with a sword, leaping and whirling and thrusting and parrying the blows of evil men. He ran in the wind and swam in the river deep in the forest and then slept in the sun on the mossy bank dreaming of endless fields and a woman like his mother coming out of the sea and embracing him.