WIPS Conversation: Claude Clayton Smith on His Work in Progress 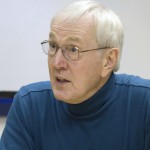 Professor Emeritus of English at Ohio Northern University, Claude Clayton Smith is the author of a historical novel, two children’s books, four books of creative nonfiction, and co-editor/translator of the world’s first anthology of Native Siberian literature. He has published more than fifty poems and a variety of short fiction, essays, and reviews. Four of his plays have been selected for production in competition. His work has been translated into five languages, including Russian and Chinese. He holds a BA from Wesleyan, an MAT from Yale, an MFA in fiction from the Writers’ Workshop at the University of Iowa, and a DA from Carnegie-Mellon. His latest book is Ohio Outback: Learning to Love the Great Black Swamp (Kent State University Press, 2010).

Claude, this opening chapter from Anatomy of Sadness explores Leo Green’s inner turmoil as he sits in a lecture hall classroom and reminisces about events in his life, trying to discover the sigh key to his psyche, the tipping point of his present despair. All the while, halfway across the country, President Kennedy’s motorcade is passing through downtown Dallas. News of his assassination will soon spread to the lecture hall before class is even over. How did you decide to tackle the subject and the premise? Did your own experience and reaction to the news at the time play into the narrative?

I began this novel in the fall of 2013, after viewing a variety of television programs on the 50th anniversary of the Kennedy assassination. It’s an event still vivid in my mind, one that lends a familiar dramatic context to any piece of fiction set in that era. While I was an undergraduate, several classmates (whom I scarcely knew) committed suicide, and I began to wonder what it would have been like to “miss” the upheaval of the assassination due to one’s own personal upheaval. Rather than invent a life for Leo Green, it was easier to draw on my own experiences. Like Leo, I first learned of the assassination while sitting in a college literature class.

END_OF_DOCUMENT_TOKEN_TO_BE_REPLACED

Claude Clayton Smith: Chapter One (excerpt) from Anatomy of Sadness

WHERE WERE YOU when Kennedy was killed?

It is destined to become the most famous question of the last decades of the twentieth century, but Leo Green can’t answer it to anyone’s satisfaction, let alone his own. He is already dead to himself by the time the President’s open limousine makes its way from Love Field into Dallas . . .

He is nineteen years old, a sophomore at Colonial College, one of those small elite New England men’s schools that would go co-ed at the end of the sixties, and he has no idea what is happening to him. The truth is, he’s in the depths of a severe depression—a term he’s always associated with United States history, economics, and the stock market crash of 1929. Yet no one applies that term to his case, nor does he ever think of applying it to himself. A “nervous breakdown” is what one had in those days, but he’s never known anyone who’s had one, except for an old friend of the family who owns a local garage and had so many cars to work on that he became unable to pump gas or even check a customer’s oil. Leo can pump gas, if he has to, or check the oil on his father’s old Chevy. The problem is his mind. It is hamstrung, stuck in the past, even as he functions in the present like an automaton. His past has become his present, his present his past. He can no longer concentrate or put two thoughts together or remember anything he’s read or said. He spends his days watching himself watch himself. And now it’s November and he is paralyzed by an all-consuming, hyper self-consciousness that overcomes him the instant he wakes in the morning and leaves him only when he manages to escape into sleep.