WIPs Conversation: NancyKay Shapiro on her work in progress 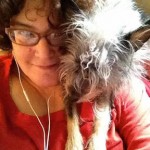 NancyKay Shapiro is the author of a previous novel, What Love Means To You People. She lives in New York City.

NancyKay, your novel Céline Varens gives resounding voice to a minor character in Charlotte Brontë’s Jane Eyre. In the excerpt we find Céline in Paris discovering that the woman whom she left her young daughter Adele with years before has already turned the girl over to Adele’s father, Rochester. Céline tells M. Carmichael that Rochester only took the girl “To punish me. To punish me. To punish me.” What intrigued you about Céline that inspired you to write a novel in which she becomes the protagonist? Do you feel she was overlooked in Jane Eyre?

Not overlooked. In Jane Eyre Céline’s not a character—she’s a necessary object, part of the plot function, referred to in dialogue but not otherwise seen by the reader, who has to take Mr Rochester’s word for her. Céline is a key figure in Rochester’s past, which he’s got to confess and live down in order to be worthy of Jane in the end. She helps make the story wheel turn, by representing for him the venality of women in general, and birthing the little girl whose presence requires Rochester to need a governess.

But to step back from the immediate question, I’d like to describe a little about where the idea to write a novel in conversation with another novel came from.

END_OF_DOCUMENT_TOKEN_TO_BE_REPLACED

After weeks of journeying, she found, when she’d finally reached Paris, that she could not proceed directly to Marie’s. Her very eagerness for reunion with her daughter checked her. Shame fouled her, tangled like rope around her ankles, hobbling and tripping her up. A four months’ tour of the provinces! That was all it was to be, a chance to save a little money and come right back. Yet she’d allowed that to turn into almost two years, to convince herself that it was for Adele’s sake that she followed Semyon further and further across Europe, all the way to St Petersburg. How many instances did she require, to learn once for all the worthlessness of men, the hollowness of their promises and inducements?

She nearly walked by the Marie’s now, not recognizing it. The house front had been re-painted in her absence. But there was the laundry, and there was the butcher—it was where the strong smells of borax and blood met and did battle, that one turned in at Marie’s doorway.

The city constantly shifted and moved, but there were some pockets, some streets and neighborhoods, that were so out of the way and ancient, so unthought-of by the powerful, that one might imagine them eternal—eternally crumbling, smelly, begrimed. Such was this little enclave not so far from the Opéra, where so many of those who toiled backstage lived their off-hours. The concierge gave her a half-stare, and a half-bob of her head. Céline returned her a smile, and said she was just going to run up to Madame Marie’s rooms, in the eaves, at the back.

The concierge said something, but she did not pause to listen. In a moment little Adele would be in her arms—right now the child was still ignorant that today was a golden one, but in a moment she’d hear maman’s call, her steps on the stairs, and know it. She fairly bounded up, holding her skirts in one hand, and in the other, the nosegay and the peppermints she’d bought along the way. The first landing smelled of fish soup, the second of tripe, the third of cabbage, and on the fourth she almost expected to see the door already flung open and her daughter rushing out with arms outstretched.