WIPs Conversation: Gabriela Denise Frank on her work in progress 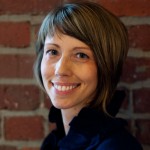 Gabriela Denise Frank is the author of CivitaVeritas: An Italian Fellowship Journey, a collection of essays and prose poetry. In 2014, her Pushcart Prize-nominated story, “Pas de Deux,” was published in Behind the Yellow Wallpaper: New Tales of Madness. Her work is supported by the Northwest Institute for Architecture and Urban Studies in Italy (NIAUSI), 4Culture and Jack Straw. www.gabrieladenisefrank.com

Gabriela, in “Into the Light,” a story from your collection in the works, Lou can’t shake past memories of her abusive father. It’s holding her back in her relationship with Sam, an all-around good guy and self-defense instructor who’s taught her how to fight back against attackers, men like her father. What she’s learned becomes invaluable when things come of a boil with her neighbor, Nils. Would you say the story’s climactic encounter is a figurative and nearly literal representation of Lou coming to grips with her closeted past?

It’s both figurative and literal, and also karmic. As humans, we get caught in traps of our own making, oftentimes the very snares that we were hoping to avoid. I think that’s because we’re attracted to patterns. Patterns can keep us alive –we learn to identify and avoid dangerous situations like dark alleys, for instance– but certain relationship dynamics can become so inborn that they inhibit our growth, if we’re not very evolved. When we are unaware as to how patterns play out in our lives, or even that they are there at all, we live at their mercy.

END_OF_DOCUMENT_TOKEN_TO_BE_REPLACED

Gabriela Denise Frank: “Into the Light,” a short story from a collection in progress

Nestled in a cheap wicker basket, the carnations and daisies didn’t say, I love you or Congratulations, they said, Sorry for being an asshole. Squatted atop Lou’s thick brown doormat like a hobo taking a rest, they winked as she approached. The homely arrangement somehow fit the potpourri of boiled cabbage and laundry soap that hung in the hallway of her apartment building just north of downtown Seattle.

She bristled at the idea of their sender lurking at her door like a lovesick schoolboy. The tiny vomit yellow envelope was the kind that men with no style picked for girls they barely knew. Squinting down, Lou conjured her neighbor’s voice from a snarled nest of inky blue letters: To better future encounters. She tore it open, her eyes narrowing into green slits. I will do my best to accommodate you, he claimed. My intentions are good.

“Like hell,” she growled. Lou stopped short of kicking the flower basket down the hall, picturing the old Japanese custodian stooping to sweep up her mess. Foiled by her conscience, she unlocked the door and gave the basket a slapshot with the side of her boot, kicking it into the living room where it lodged beneath the radiator. The arrangement remained there for days until the flowers crisped from the popping steam heat and a hole burned in the side of the basket.