WIPs Conversation: Raymond Cothern on his work in progress 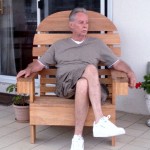 Raymond Cothern studied writing with Walker Percy and Vance Bourjaily. Winner of the Deep South Writers Conference and the St. Tammany National One-Act Play Festival, his plays have been produced in New York City. Nominated for a Pushcart Prize, his fiction, poetry, and essays have been published in North American Review, Manchac, Intro 8, Two Thirds North, American Antheneum, and in the book Meanwhile Back at the Café Du Monde.

Raymond, in “Motherless Child,” Sarah reflects on her unusual upbringing after her mother Lacey’s suicide. At times, the roles of mother and daughter had seemingly reversed, and Sarah finds herself “admitting again she became a psychiatric social worker with dim hopes of saving her mother, or failing that, saving herself.” Perhaps she failed to save her mother, but, as the narrative slowly reveals more about Sarah’s own personal struggles, it seems to offer hope for her by the end. Although largely focused on Lacey, do you consider “Motherless Child” an indirect route to Sarah’s own story?

Oh, absolutely. It is as much Sarah’s story as it is her mother’s. Some may be left to the reader’s imagination how much Lacey’s actions may have affected her daughter. The thought of a mother sharing intimate details of a sexual nature with a daughter might make the skin crawl, for a daughter as well perhaps for a reader. Having repeated plenty of parental patterns of my own, and especially seeing how much I passed on to my two daughters, I have always been fascinated at how much less desirable attributes—whether genetically or environmentally—get pushed on.

END_OF_DOCUMENT_TOKEN_TO_BE_REPLACED

Sarah’s uncle telephoned in the morning with the news but was so distraught Sarah had difficulty understanding him. Told he would call again later when he knew more and had more things arranged, Sarah tried to remain calm—her mother was gone—while thinking through preparations for going to Louisiana for the funeral. She finished a stack of patient progress reports as the day wore on and that night was cooking stir fry and checking the television listings for something to divert her thoughts when her uncle called again. The receiver under her chin, she had trouble following his rambling sentences—especially after being informed in a cracking voice that her mother had taken a swan dive from a bridge in San Francisco.

“And she wanted me as a pallbearer?”

“Yes,” Billy Wayne told her. “She left instructions how things should be carried out.”

“And you’re telling me the funeral is at an old bar in Louisiana?”

“No, no. The request is for the pallbearers to meet there prior to the funeral.”

“If you weren’t my uncle I would think this a joke. My mother is really dead, right?”