WIPs Conversation: Cal Freeman on His Work in Progress 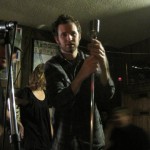 Cal Freeman was born and raised in West Detroit. He holds a BA in literature from University of Detroit Mercy and an MFA from Bowling Green State University. His writing has appeared in many journals including Commonweal, The Journal, Nimrod, Drunken Boat, Ninth Letter, and The Paris-American. He currently lives in Dearborn, MI and teaches at Oakland University.

Cal, in this excerpt Pastor Timothy Eigen finds himself compromised in his position as spiritual advisor and marriage counselor by his feelings for Paula and ability to dismiss Jerry for someone who “loves her for her prettiness though and has no notion of her beauty. An old story dating back to David and before.” By the end of this chapter things it appears are going to get rather tricky, and could affect Eigen’s life in many ways, including the relationship he has with his congregation. Does this dilemma continue on as the crux of the novel?

In a sense, yes, though Eigen manipulates the situation in order to get what he thinks he wants. He and Paula fall in love and she leaves her husband, which is what, at this point, she is leaning toward anyway. The tragedy is that every choice she and Eigen could conceivably make is untenable. The psychic consequences of this kind of thing make the pastor’s descent into an early senescence merciful.

The divorced Eigen had plans for growing crops on his new farm, but “The furrows where the plow had once turned up and divotted the earth were indistinct, shambolic clay without apparent form. Straight lines become a diaspora of muck.” Is this somehow symbolic of the disarray of his present? How did you come to title the novel Tractors?

Absolutely. The title comes from the name of the high school football team, Jerry, the story’s ex-jock/cuckold played for. He has never gotten beyond the glory of his 1969 all-state season. Tractors always struck me as plodding and slow, sort of like remediated mules. A good figure for the Jerry character, though I don’t want to denigrate him; I actually admire his hardheadedness and wish I had more of it.

The story is set in rural Michigan, and the region’s terrain, its flora and fauna, as well as its people, are described in beautifully detailed prose. Pastor Eigen finds peace in the natural world, while “decrying the pathways of the industry these people revered beyond any rational comprehension.” In following Eigen’s progress as the narrative unfolds, is the reader treated to similar scenes and reflections?

Yes, the logic of the Eigen character is a totemic logic. As the narrative unfolds, he and I are both looking for objective correlatives in the natural world. That being said, there isn’t a ton of ecological awareness in this book. Eigen’s castigation of industry in this passage is more of a castigation of human nature. Eigen includes himself in this, too, recognizing his own base impulses and desires, searching for some inner virtue or some faith-based virtue before ultimately rejecting the notion categorically.

Pastor Eigen is looked to for guidance, and as a judge of character. But that’s often a considerable challenge. For instance, he questions why he holds Dennis in such higher esteem than Jerry, when really, they aren’t that different. A man of God is still a man, but one who must undertake a great deal of pressure and responsibility in the lives of members of his congregation. Does the degree to which he embraces such responsibility waver or hold steady over the course of the novel?

I like this question a lot. I think he continues to embrace the responsibility, even after he’s been absolved of his duties. However, at a certain point this sensibility devolves into self-detestation and a recursive loop of sordid thinking.

What is the current status of the novel? Are you still working on the manuscript or sending to agents, publishers, etc.?

I am still working on the manuscript, but I am almost done with a complete draft. A good friend of mine, Rob Keast, a high school teacher and young adult novelist from Wyandotte, MI, has helped me quite a bit with revisions and guidance along the way, so I’m hoping to buy him some beer and heap the 50,000 or so words I’ve written since the last time he’s had a look at it upon him before beginning the process of sending the whole manuscript to publishers or agents. It’s getting closer though.

In addition to Tractors, do you have any other creative projects presently in the works?

Yes, my first book of poems, Brother of Leaving, is slated to come out some time in 2015. I’m also getting ready to record a second album of original songs with my band, The Codgers, a folk-Americana group from Detroit.

I’d just like to thank people for taking the time to read this excerpt. Writing long form fiction is an incredible lonely process, so it’s great to have a venue like this! Thanks.

Read the excerpt from Tractors. Cal’s novel in progress.