WIPs Conversation: Heather Luby on Her Work in Progress 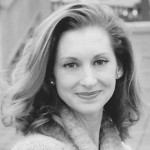 Heather Luby is really nothing more than a girl from the Ozark Mountains that grew up with dreams of writing stories. Her work has appeared in Word Riot, LITnIMAGE, Bartleby Snopes, Halfway Down the Stairs, Travel by the Books,  and Annotation Nation. She is the Managing Editor of The Citron Review and a Creative Writing Instructor with St. Louis Community College. Heather has an MFA from Antioch University Los Angeles and her novel Laws of Motion is represented by Bill Contardi of Brandt and Hochman Literary Agents. When not conversing with the characters of her imagination, she can found wrangling two willful and beautiful daughters around the suburbs of St. Louis, MO.

Heather, the beginning chapters of Laws in Motion really set the stage for Tom’s hitherto unknown discoveries later in the novel. While the novel is a literary one, it includes plot elements of a mystery thriller. During your work on the book, did you turn to any novels of genre for guidance? If so, were any influential in affecting your writing style?

I always turn to other writers and works that I admire for guidance when I ‘m writing. One of my mentors in graduate school, the writer Leonard Chang, gave me a piece of advice that has been the cornerstone of this novel and that was to “always read work that informs your writing.” In my case, there were a handful of highly influential books. Reservation Road and Northwest Corner, both by John Burhnam Swartz. The Year of Magical Thinking by Joan Didion, I Know This Much is True by Wally Lamb and The Sportswriter by Richard Ford. None of these books have a real mystery or thriller component, but each one contributed in the development of my novel in some specific way. The works by Schwartz are probably the closest in that they deal with violent death and some criminal actions. However, I mostly read to inform myself on grief and the male experience, assuming that if I could get into Tom’s head, and write him authentically, the rest would take care of itself.

I was intrigued to see how the story begins in Tom’s head, imagining the circumstances of his wife’s murder, a nearly identical scenario to the one you wrote about in Acceleration Due to Gravity published at LITnIMAGE  Later, perhaps as an ongoing expression of his grief, Tom wonders what her life would have been like had they never met, such as “Living in Denver as a news-anchor or in Orlando as a lawyer.” His mind is as active as a fiction writer’s, no?

Tom does spend considerable time during the novel asking himself “what if” questions. I think whenever we lose someone close; it is human nature to ask questions about how things could have gone differently and if some other decision could have saved them. “What if we found the cancer earlier?” Or, “What if he didn’t go to work that day?” Or, as in Tom’s case, “What if we never met?” His grief is so crushing that he is willing to imagine a life without her, if it means he could save her.  But I think many people have mind’s that are active like a fiction writer’s—writers just feel compelled to put those thoughts on the page

In this excerpt you’ve done a wonderful job of establishing Lora’s character in her absence, particularly through Tom’s reminisces. As a reader I felt I really got to know her in these first few chapters. In writing the novel did you consider her character definition an essential component of the story?

Yes, I think for my readers to truly understand and experience what Tom has lost, they have to first understand what he had with her. The only way to do that is to make sure the Lora is a real person, not just a memory. I also wanted to explore Tom’s feelings of responsibility to their daughter and how desperately he wants to remember the real Lora so that as Jess grows up he can share with her what Lora was really like.

Tom’s narration strongly internalizes his struggle with grief. With Jess, or Lenore, and even Lora’s “best friend” Anna, the way they deal with it is seen principally through their actions. Was it a challenge to write about the subject matter and the ongoing influence it had over the general tone of the narrative?

I can say that when I’m finally finished with this book, I’m going to need to trip to Disneyland or someplace happy! Working within the point of view of Tom for the last few years has been a challenge. I think when a writer works in the first person point of view it requires a similar skill set to that of an actor. You really have to submerge yourself; its method acting with a pen or a keyboard. It also means that for the last few years I’ve spent a great deal of time being a bit paranoid about the health and well-being of my loved ones, and always very thankful that my husband comes home from work every day.

You now have representation for the book. Kudos on that. How has it been working with your agent? Although the manuscript is complete, is it undergoing any revisions?

Thank you! Yes, I do have representation.  My agent is Bill Contardi of Brandt & Hochman. I have been working with Bill since the summer. I am currently completing a round of revisions, mainly working on the pacing of the narrative, but also adding in some additional scenes with a character that isn’t introduced in this excerpt, but plays a pivotal role in the novel.  This is my first round of revisions with Bill, but my third overall, so my fingers are crossed!

Thanks, Heather. Is there anything else you’d like to mention or explain to readers?

You mentioned in your first question that my novel has elements of a mystery thriller, but is still considered to be a literary novel. You are correct! While I wanted to present an accurate picture of male grief, and that is really what I believe is at the heart of my work, I also wanted to surprise my readers and to challenge them to think about how our decisions have multiple and ongoing consequences.  Not just for ourselves, but for every one in our lives, especially those we love. It is Newton’s laws of motion applied to our ordinary lives: To every action there is always an opposite and equal reaction.

For your readers who might read this excerpt and wonder what that means for Tom, I want to add that while he is struggling to make sense of his life in the aftermath of his wife’s violent death; he will discover that she may have been keeping a big secret. As he scrambles to uncover the truth, he will come face to face with his own past actions and what part they might play in the events that led to his wife’s murder.

Last, but not least, I want to thank Works in Progress for publishing my work. It is really wonderful to find a journal that is willing to share excerpts of longer works and to have a dialogue with authors about their writing. I’m really thrilled to be a part of it.

Read Heather’s excerpt from her novel Laws of Motion

Heather Luby: Excerpt from Laws of Motion (a Novel in Progress)
Fred Skolnik: The Story of A. (from Things Unsaid, a Work in Progress)