WIPs Conversation: Joachim Frank on His Work in Progress 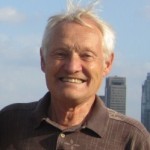 Joachim, the “Downpour” of radioactive rain at the May Day celebration along the Rhine sets a sobering tone for what’s to come. What led you to set the prologue in the wake of Chernobyl and do elements of the Chernobyl disaster continue to resonate throughout The Observatory.

The prologue’s purpose in this novel is to set the stage in Germany, particularly Bonn, where all the action of the main story will take place. The May 1, 1986 event on the banks of the Rhine in Bonn very closely follows historical accounts. I chose it in order to have a plausible reason for the downhill spiral in the marital relationship between Arthur and Eva later on, which leads to their separation. In a way, a relationship is poisoned slowly, in the same way as radioactivity leads to deteriorating health and cancer in the long term. Chernobyl itself as a topic does not recur in the main story; however, its prominence in the prologue serves as an introduction to American readers telling them that the stage is set in post-war Europe with its complicated interconnectedness of East and West. Also, a reminder that Europe is in fact a small theater for events — a cloud coming from the Ukraine reaches Bonn in a few days, the same time as a cloud from coast to coast in the United States.

In the excerpt things between Arthur and Eva start to spiral downhill and the passage of time doesn’t seem to reverse things. She blames him for the death of their newborn son; thirteen years later he feels she has tainted their relationship with their daughter Simone through years of neglect. Yet Arthur and Eva remain together. Are their marital troubles an ongoing dynamic of the story? Is Simone still a key figure as the narrative moves forward?

At the beginning of the main story Arthur is Department Chair of Astronomy, a prestigious position at the zenith of his career, but his marriage is falling apart. This coincides with (and is reflected by) the fate of the building that lends the title to the novel: the ancient and now useless Observatory which the cash-strapped University sells to an entrepreneur who promptly turns it into a strip club and bordello, to the chagrin of the academic community. The Observatory and the widening scandal in Bonn’s society prompted by its misappropriation is a continuing presence in the story. Arthur’s own world collapses; he loses his federal grant funding, then his position in a quick reversal of fortune. After a series of tragic-comical one-night stands he winds up with his former secretary (Roswitha) as sole consort and consolation. It is only the death of his wife, through an accident, that brings Simone back into his life – the daughter, in college now, who is very bitter about her parents’ absence from most of her life, and now has to confront Roswitha, her father’s new girlfriend who is just a few years older than herself. In his rapidly shrinking world, as a book keeper of the beauty salon she has started, drawing on his strengths in math, Arthur tries to understand the strange turn of events, and finds a narrative of sorts that reconciles him with his fate. All along, he has been a clueless bystander watching his own downfall, but in the end he surprises himself as he comes to appreciate the value of what is left.

“Downpour” spans a groundbreaking (wall-breaking?) time in German history, and references events before and after the fall of the Berlin Wall. Arthur blames his son’s death on “the real culprits … inept government officials on both sides of the Iron Curtain.” Does The Observatory often delve into the politics and culture of German life?

There is not so much politics as there is a reflection of local culture – Germany’s newly grown “Schickeria” (a coinage pronounced “shickereea,” related to the French “chique”), the socialites who pride themselves as being at the avant-garde in style and mastery of conversational topics but are shallow at the core. They are present at one of the artsy garden parties that Arthur’s friend throws to show off his wood sculptures. One also notices them at a faculty dinner and as a background at Eva’s funeral.

Here in the prologue readers get the back-story into Arthur and Eva’s contentious life together, with a glimpse of how they’re doing just before the millennium. During what period is the rest of the novel set?

At what stage are you in writing the book? Do you have a finished manuscript?

The MS was almost finished in 2007. I put the last touches to it when, in 2008, after my move to New York City I met an agent who got very excited after reading the whole draft and signed a contract with me. As a former editor of a publishing house, he gave me a few suggestions regarding consistency and diction. In a year-long effort he tried to sell it to a number of high-ranked publishing houses where he had personal contacts. Some responses were nice but didn’t lead to anything. He gave up after a year, explaining to me that the market for literary fiction has virtually disappeared.

I’m intimately familiar with Bonn as a city since one of my sisters and her family lived there. Bonn is a unique part of Germany’s post-war history since its choice as the nation’s capital was imposed by the Allies. As an ambitious yet deeply provincial stage of world politics, the way it was chronicled by the weekly magazine DER SPIEGEL, Bonn often resembled a theater of the absurd.

Read Joachim’s prologue, “Downpour,” from The Observatory, his novel in progress.