WIPs Conversation: Len Joy on His Work in Progress 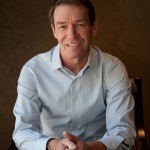 Len Joy lives in Evanston, Illinois. His short fiction has appeared in FWRICTION: Review, The Journal of Compressed Creative Arts, Johnny America, Specter Magazine, Washington Pastime, Hobart, Annalemma, and Pindeldyboz. He is a competitive age-group triathlete. In June 2012 he completed his first (and probably only) Ironman at Coeur d’Alene, Idaho.

Len, in the beginning chapters of American Past Time excerpted here, Dancer Stonemason appears to live out a baseball player’s dream: pitching a perfect game in front of his family and carried off a hero on the day he gets called up to the Big Leagues by the St. Louis Cardinals, the team he’d followed as a boy. But the duration of game precludes the call up. Still, “No matter what else happened they would always have that game. That moment. And Doc was right. He was young. He’d get another chance.” With a growing family and money beginning to get a little tight, the words seem ominous. Can you give readers a hint of what’s to come?

If Dancer had come out after three innings, as they had planned, his whole life would have played out differently. The doctor is not always right. Sometimes you only get one shot.

The story takes place in the 50s, when life in America was considered by many to be a simpler, if not idyllic time. The Middle America depicted here is one-stoplight towns with a Main Street, post office, Tastee-Freeze, Dabney’s Esso Station, and the like. How did you decide to set the story where you did in terms of time and place? Were there any literary or creative works that inspired your writing? Any related to baseball?

The novel actually has a twenty year arc and it covers probably the most tumultuous decades of the post-war era. The civil rights movement, the space program, and finally the war in Viet Nam are all part of the environment in which the novel plays out.  But that is just a backdrop. American Past Time is about what happens to a man and his family after the cheering stops. It’s a story about youth and pursuing dreams.  And it’s about love and loss and trying to survive.

In terms of literary inspiration, I appreciate Hemingway and Raymond Carver for their spare writing style. I like simplicity. In terms of subject matter, I’m drawn to novels with small town, blue-collar settings like Richard Russo’s “Empire Falls,” or Tawni O’Dell’s, “Back Roads.” My alltime favorite is Larry McMurtry’s, “The Last Picture Show.”  I loved the book and I’ve watched the film version a dozen times, but that may have something to do with Cybil Shepherd.

The novel’s title as well as the protagonist’s name is quite provocative. American Past Time a clever play on words (double-entendre?) concerning not only the sport of baseball but also a by-gone period in American history. Then there’s Dancer Stonemason, a character whose name embodies two very disparate professions or avocations, one known as delicate and artistic, the other for strength and fortitude. How did the title and Dancer’s name arise?

A couple years ago (when I thought I had almost finished the novel) I attended the New York State Summer Writers Workshop at Skidmore College and I had Joe O’Neill (“Netherland”) as a workshop leader. The group critiqued this excerpt and one of Joe’s comments was that this seemed to be a “quintessentially American story.”  That stuck with me and I thought American should be in the title.  The story has a baseball component, but baseball action is probably less than five percent of the novel.  I didn’t want to run from the baseball aspect because I think it is important, but I wanted potential readers to understand that this was not a baseball novel. I wanted the title, “American Past Time” to work in just the way that you described it.  So I’m pleased with your interpretation.

In the summer of 2005 my niece asked me to write a short story to be read at her wedding. It was a really bad idea and she was finally convinced of that, but not before I had written a thousand word story about a character named Clayton Stonemason who is driving to Chicago for his niece’s wedding. A year later I expanded that story and gave Clayton three ex-wives, and a troubled relationship with his father. One day while I was working on that story the phrase, “Dancer Stonemason is Missing,” popped into my head. I don’t where it came from, but I knew that Dancer was Clayton’s father. I gave Dancer a backstory, and like an overbearing parent he took over and that story became a novel about Dancer and his family.

The baseball narrative on the field and in the clubhouse is pitch perfect, but the greater narrative addresses a number of themes and issues—marriage and family relationships and responsibilities, a culture where “colored” men are “boys” and provide demeaning work with a smile, and the changing American landscape, where Crutchfield General Stores sprout exponentially and might one day become like Walmart, the only place where people shop since there’s no competition. At its essence, what do you consider the novel to be about?

American Past Time is being published by Hark! New Era Publishing, and will be available in late April. Congrats on that—you must be excited! Can you describe the process of how the novel progressed from manuscript to publication?

From the day my niece commissioned that short story to the final edit took eight years, nine months and three days.  Every year I hired a writer to critique my work. I always hoped when I made that investment that they would come back and tell me, “This is great. Send it out.” But they didn’t. Mostly they said, “This isn’t bad. Write it again.” And they were right.  More or less in order I had editorial assistance from Whitney Otto, Barbara Croft, Sands Hall, Patrick Somerville, Marita Golden, Victoria Mixon, Sue Williams and Pamela Erens.  I also attended summer workshops at Iowa Writers Festival, Tin House, Squaw Valley, Skidmore, Norman Mailer, Sewanee and Bread Loaf.  If everyone who was in those workshops would just buy the book, I might have a best-seller.

Working with Hark! has been a great experience for me. They commited to the manuscript eighteen months ago.  They worked with me on the structure and made me write the scenes I had avoided for years because they were difficult.   I really enjoyed working with Jon and Amana Katora at Hark! They helped me to make American Past Time the best novel I could write.

Do you have any other creative projects presently in the works?

I am about half done with the sequel to American Past Time, which is titled “American Jukebox.” It has many of the same characters and all of the action takes place on a single day in 2003 – the day before a wedding. I hope to finish it this year.  But I’ve said that before.

These were great questions, Roland. Thank you for publishing this excerpt to “American Past Time.”  The book should be available on Amazon and other platforms as both an ebook and paperback after April 19.  Oh – and the shadow illustration on the cover was done by my daughter, Nicole Joy.

Read “Dancer,” an excerpt from American Past Time, Len’s novel in progress.