WIPs Conversation: R Dean Johnson on His Work in Progress 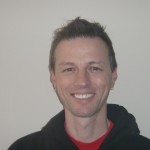 R Dean Johnson’s fiction has twice been nominated for the Pushcart Prize anthology, and his essays and stories have appeared in Ascent, Natural Bridge, New Orleans Review, Slice, Santa Clara Review, The Southern Review, and elsewhere. He teaches fiction and creative nonfiction workshop in the Bluegrass Writers Studio, the Brief-Residency MFA program at Eastern Kentucky University, and his students all call him Bob. Originally from California, he now lives in Richmond, KY with his wife, the writer Julie Hensley (who calls him Bob), and their two children, Boyd and Maeve (who call him Da).

Bob, “Cards for All Occasions” comes from a work you’re titling Delicate Men, about the frustrations and guilt men often feel for not living up to cultural ideals, or even cultural norms. In the story, Erik demonstrates his own fragility in trying to “protect” his beloved cousin, falling prey to his own insecurities, jealousy, ignorance, and homophobia. He makes a living expressing sentiment directed for and on behalf of strangers for Hallmark—a modern-day Cyrano of sorts—but is entirely out of touch regarding the relationships in his own life. Are other protagonists in the collection marked by such irony?

There is a strong thread of irony running through the collection of stories that make up Delicate Men. I like that you reference Cyrano because as much as irony plays a part in the collection, it is often informed by a search for, or veiling of, identity.

The collection’s title story, “Delicate Men,” is about a middle school boy trying to fit in at a new school. He gains a tenuous acceptance with the most popular crowd but when he witnesses a one-sided fight between one of his new friends and an unpopular kid, he empathizes with the latter. By the time he gets home he’s crying and confused by his emotions. All along he’s been afraid he’d be the one who got beat up at the new school, and as certain as he is that he avoided this fate, the reader knows he has been beat up emotionally. But, I don’t know that the dramatic irony of that story would work as well if it weren’t informed by the protagonist’s struggle with identity at his new school.

There’s a lot to explore regarding the theme of your collection, for instance the contemporary male ideal differs depending on its relation to gender, race, age, location, income status, profession, etc. Do the characters in the stories span a wide variety of backgrounds?

In some ways, very much so. The characters range from young boys to mature men, from an under-employed valet to an unsatisfied investment banker. The settings take the reader from Amsterdam and Munich to New York and Los Angeles. One story follows a young Caucasian man who struggles with his racial identity while another features a man forced to confront his stereotypes. But as the collection has come together, I’ve found myself writing from the perspective of, essentially, a control group. The protagonists are all urban and middle class—some at the lower end of that, some at the higher end. Once I recognized this, I grew pretty comfortable with the idea. It allows me to more believably explore different ideas on gender, race, age, etc without the added, perhaps distracting, complications of a protagonist from an already marginalized culture or, say, a character at an extreme end of income, or politics, or even religion.

The form and style of “Cards for All Occasions” intrigues. Each section begins with italicized scene and setting descriptions, as if part of a stage-play script. Also, it assumes the dialogue script form during the flashback to the theater party in college, and near the end of the story, in each case when Erik assumes the role of “gay seducer.” What was your intention in these cases? Do other stories in the collection utilize varying degrees of form and style?

The first drafts of “Cards for All Occasions” had subtitles in different sections that I imagined were some of the headlines and punch lines from Erik’s greeting cards. Things like, “The only thing better than sharing a sunset with you / Is sharing a sunrise the next day” and “All these years and you haven’t changed / How old is that shirt anyway?”  I had a lot of fun writing them but they also felt artificial. They were part of Erik’s character but not essential to the plot.

It wasn’t until a later draft that the drama Erik is trying to force into his cousin’s world started feeling like a good way to tell the story. Initially, it was an experiment, but the more I worked with it the more organic it became to the piece. By the time Erik is trying to seduce Junot, I knew Erik’s dialogue had to be written as drama. Junot’s is too at first because he’s getting sucked into the drama without realizing it. For me, the real breakthrough came in a revision when Junot started recognizing what Erik was doing and I found myself releasing his dialogue from dramatic form and returning it to standard, fiction form. Junot’s words, actions, and the visual presentation of both then came together so the reader understands what he now knows without the narrative voice having to be intrusive.

There are two other stories in the collection that might seem nontraditional in terms of form. One of them, “Beginner’s Guide to Brugge,” is written in second-person point-of-view and as a guidebook. When I finished it, I was afraid journal editors would think I’d written it in second-person just to be different. But just as writers often begin a draft of a story in first or third-person without giving much thought as to why, the first draft of this story came out in second-person. Upon revision I questioned this, in part because I was afraid it would be hard to publish but mostly for a more practical reason: was this the best way to tell the story?  In the end, it was the best way to tell the story and a lot of editors liked it, though not enough to publish it. One editor encouraged me to switch it to first-person and resubmit. Eventually, the editor of Juked, J.W. Wang, saw the story as I did, published it, and later nominated it for the Pushcart Prize anthology.

Of all the things I’ve ever published, seeing “Beginner’s Guide to Brugge” go to print may have been the most satisfying. It was a confirmation then, as “Cards for All Occasions” is now, that if the form breaks grow organically from your intentions for a story and they become more and more refined until the form mirrors the content, the right editor will recognize this, appreciate it, and entrust readers with it.

It’s hard to pick, but here are three stories that, I think, show the range of the project as it relates to the theme:

“Captain of the Drive” (Santa Clara Review) is about a teenager who must work a summer job where he thinks he is more intellectual than everyone else but soon finds much of what he knows does not apply to the world he will inhabit for the next three months.

“Outside the Palace” is about a guy on a date who has been flashing money around all night but, when confronted by a homeless man, feels compelled not to give the man anything. The premise is so simple but I think, I hope, the subtext is both accessible and powerful. And now that I’ve said that, I feel silly for claiming the story could be powerful. But, it’s in the online journal, Atticus Review , so readers can judge for themselves and then comment. I should add that I’d love to hear what people think of the story, even if it is to say it’s falling short of my lofty goal for it.

And I don’t want to be a spoiler for the second-person, guidebook story, “Beginner’s Guide to Brugge,” but I think it’s a fun read. (Hopefully, that’s intriguing enough). It certainly takes on several cultural expectations for middleclass males and sets the protagonist, sometimes unwittingly, against them. It’s available on the Juked website.

How close is the manuscript of Delicate Men to completion? What are your upcoming goals for the project and the next steps you plan to take?

It’s a project I stumbled upon initially. My wife Julie Hensley, who is also a writer, said, “You know, you keep writing about all these delicate men; why don’t you make it a collection and call it Delicate Men?”  At first, I was afraid she was saying that I kept writing the same story just with a different protagonist and location each time. She was actually identifying the theme, however, and once she did I began seeing how the stories connect in several ways even though only one of the protagonists recurs. All of that is to say, I’ve had it finished once or twice now, then added a story, then taken out a story, then put a story back in, and so on and so on. So, I have a complete manuscript I’ve sent to a few small presses and contests, and I recently got to the second round with one press and am waiting to hear back. But, there are three more stories I’ve drafted that are a great fit for the collection. The bad news is that I currently have no time to revise them. The good news is that I have a novel manuscript for which I recently acquired an agent and so I’ve been working closely with her to revise the novel. Once I’m through those revisions, I’ll return to the last three stories for Delicate Men.

I’m so thankful to have had this opportunity to talk about this project and the stories that make it up. Is it Flannery O’Connor who said that if a writer can say what his story is about then it must not be a very good one? I don’t think that’s entirely true. I do think it’s hard to talk about stories and make them sound as good as they read, but I am really excited about how far this project has come and where it is headed, even if Flannery O’Connor is grinning at me as I do it.

Read R Dean’s excerpt from Cards for All Occasions

R Dean Johnson: Cards for All Occasions (from a Story Collection in Progress)
Steven Ostrowski: Welcome to Oblivia — (Chapter One from The Last Big Break, a Novel in Progress)