WIPs Conversation: Randy Nelson on His Work in Progress 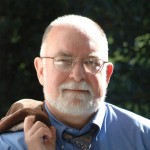 Randy Nelson is the Virginia Lasater Irvin Professor of English at Davidson College, where he teaches courses in nineteenth and twentieth century American fiction as well as workshops and seminars in creative writing. His short stories have appeared in many national and international markets; and his instructional essays are to be found in magazines such as The Writer. A multiple-award-winning author, his most recent recognition was the Flannery O’Connor Prize for his collection The Imaginary Lives of Mechanical Men. At different times in his career, Randy has been a textile mill worker, a soldier, a landscaper, a garbage man, and a baseball coach; but the great love of his life, aside from wife Susan, has always been teaching. His students include Patricia Cornwell, Sheri Reynolds, and other nationally recognized writers. He’s currently at work on a new collection of stories.

Randy, in “Someone from the North,” your excerpt from A Duplicate Daughter, a strange cowboy PI from the other side of the mountains visits “what used to be a village” before a major earthquake, and, years later, is “little more than a dumping ground.” An old license plate is the cause of his visit. Can you explain the premise?

Sure. The private investigator, Gerald Manley, has been hired by a wealthy California family to pursue new clues in an old kidnapping case, that of the wealthy couple’s infant daughter in 1936. Detective Manley succeeds beyond anyone’s expectations, finding twelve year old Mía Muñoz and restoring her to a life of wealth and privilege back in California. This remarkable stroke of luck is more than it appears to be however: in tracking down the license plate, Manley has found the right name, but the wrong girl. The real baby was killed in the earthquake referenced in your question. The quake nearly destroyed the village that the “kidnappers” happened to be driving through.

As the plot develops, it becomes advantageous for everyone in the story to lie about this new girl’s identity. Even the parents unknowingly participate in the fiction because they can’t allow their hearts to be broken for a second time. When the truth finally does emerge, everyone, including the people closest to Mía, refuses to believe it. For different and sometimes Machiavellian reasons, all the major characters need to maintain the lie that this is the right girl. A Duplicate Daughter, then, is one of those books in which it’s the grand, agreed-upon fictions that determine who we are, as in Atonement or The English Patient or Never Let Me Go (although let me add quickly that I’m making an analogy here, not putting myself in the same company of authors).

Amedeo Muñoz sees an opportunity to change the fortunes of his young daughter, Mia, who’s otherwise destined to a future as “a whore or a peasant.” Is this a fortuitous case or did Amedeo indeed have some role in how circumstances are playing out?

You’re right to intuit that Amedeo is the key figure in this narrative. He’s the person who first seizes upon the idea of substituting his adopted daughter Mía for the real girl. Depending upon your point of view, this is either a profoundly immoral act or else a noble, albeit desperate, attempt to save his child.

Amedeo’s choice, however, is more complicated than the other characters understand. You’ll notice that in my preceding answer I put the word kidnappers in quotation marks, the reason being that Amedeo is actually the father of the first baby, the one killed in the earthquake. He and Leala Cruz (the wealthy wife back in California) have been having an affair. Their mutual plan was for Amedeo and the baby and the child’s nurse to meet Leala in Sangre de Cristo, Mexico, as soon as Leala could escape from her cruel husband. But of course it’s a plan that goes horrifyingly wrong when the earthquake hits. In a sense, everybody’s trapped in place. Amedeo’s first and most difficult task is simple survival, but his secondary task becomes how to dig himself out of the complication he has, in large measure, created.

The scene here takes place in a desolate mountainous region of Mexico in 1948, although the baby girl’s kidnapping took place in California, twelve years earlier. How did you decide to set the story in such a place and time?

I’ve always been in love with the 30’s and 40’s. To my mind they represent the last era of genuine heroism in our culture, the last moment of real elegance in style, the first hint of the acceleration that would explode into our modern world. I appreciate the grand optimism of the New Deal while at the same time I’m attracted to the darkness of writers like Chandler and Hammett. Mainstream literature was dominated by Hemingway, Faulkner, Fitzgerald, and Steinbeck; but the country had room too for the golden ages of science fiction, the movies, and radio. Who wouldn’t love an age that saw half of our literary elite hammering away on movie scripts as they worked part-time in Hollywood?

For A Duplicate Daughter I needed an era that was recognizable to contemporary readers but whose social conventions (the scandal of divorce, having a child out of wedlock) were still largely products of the nineteenth century.

As for the physical settings, I had to do a lot of research. I’m certainly no expert on Mexico, but I finally found the village I wanted in the form of the Cumbres de Majalaca National Park, in the Sierra Madre Occidental mountains (google it; it’s beautiful). This park is known for its fantastic rock formations and lush forested areas in the midst of a huge desert region—almost a Mexican Shangri La. The California setting, on the other hand, is purely a product of my imagination. It’s the last of the grand 19th century haciendas; and it represents an elegant, mannered, but dying way of life.

In effect, both of these settings are islands. Though vastly different, each one is a kind of ruined paradise surrounded by a literal desert on the one hand and by modernity on the other.

Later on, in a case of mistaken identity, Mia goes to live with the wealthy Alejandro Cruz. Do the other characters here, such as Amedeo, Manley, and Quentin continue to figure in the plot of A Duplicate Daughter as its storyline progresses?

You bet they do. Alejandro, though a villain, is strong, courageous, brilliant, rich, and of course cruel. He loves Mía however and strives to be a good father. He is in many ways the mirrored inverse of Amedeo. Of course the emotional climax occurs when Mía has to choose between her two worlds. She thinks she can compromise, but . . . this isn’t the Persephone myth.

Quentin, seventeen years old at the beginning of the story, has to grow up to be a man worthy of Mía, who has herself matured into a very strong and capable young woman by the end. And as for Manley, what kind of writer would let him fall out of the story? He’s fundamentally a skinny, wise-cracking, scene-stealing Tommy Lee Jones. I love Manley. He’s my respectful nod to Sam Spade and Philip Marlowe.

You’ve completed a draft of the novel and a manuscript is circulating among publishers. How is the process going?

Better than I deserve. I don’t have an agent at the moment but have been lucky enough to attract the interest of publishers. The whole process, nevertheless, moves at the speed of a glacier. So, while pretending to be disinterested, I spend a lot of time keeping my fingers crossed. I’m sure everybody reading this interview already knows the feeling: you hope for a good result, know you should keep writing away on that next project, but can’t help glancing up at the clouds from time to time and wondering what if.

Short stories. That’s where I do the majority of my publishing, and it’s the genre that I love the most.

I love teaching the most. I began writing because I needed to understand what, and how, to teach. A great short story, like a great novel, is an elegant solution to a fictional problem; but exactly how you teach (or even whether you can teach) creativity is not at all evident. I try to figure out ways to make my students recognize genius when they see it and then to produce their own acts of imagination in ways different from gimmicks and superficial originality. On any given day, then, my most important creative project is likely to involve somebody else’s creativity. The breakthrough, the cliché-busting insight, can be sudden; but it’s usually the product of a slow and careful attention to language. So that’s my job on many days–to slow everybody down, to help beginning writers focus on closely observed details as well as the big rushing river of ideas, and to convince folks that style and craftsmanship aren’t necessarily the same things. Finding the great recognition scene for one of my own characters is rewarding, yes; but seeing that happen for a student writer is pure gold.

I believe that one of the great lessons of literature, and of fiction in particular, has to do with seeing a problem or a situation from somebody else’s point of view. That’s a profoundly important, and largely neglected, component of good public discourse, isn’t it? Imagining a circumstance from someone else’s perspective is, I think, a moral act. That it also happens to be politically, socially, emotionally, economically, militarily, historically, artistically, and technologically smart is an added benefit. –Makes me wish there were a few more English teachers in Congress.

That said, I believe I should end by thanking you once more for this opportunity to chat with people who really care about writing. Good storytelling matters, and I love being around people who understand that. So know that I’m very appreciative for this conversation and that I wish all the other aspiring writers out there the best of luck.

Read “Someone from the North,” an excerpt from Randy Nelson’s The Duplicate Daughter.