WIPs Conversation: Mark Budman on His Work in Progress 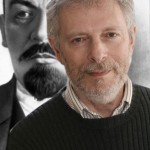 Mark Budman was born in the former Soviet Union. His fiction and non-fiction have appeared in such magazines as Mississippi Review, Virginia Quarterly, The London Magazine (UK), McSweeney’s, Sonora Review, Another Chicago, Sou’wester, Turnrow, Southeast Review, Mid-American Review, the W.W. Norton anthology Flash Fiction Forward, Not Quite What I Was Planning: Six-Word Memoirs by Writers Famous and Obscure, Short Fiction(UK), and elsewhere. He is the publisher of a flash fiction magazine Vestal Review. His novel My Life at First Try was published by Counterpoint Press to wide critical acclaim. He co-edited flash fiction anthologies from Ooligan Press and Persea Books/Norton.

Mark, this excerpt from “Lenin: Red, White & Blue” is an engaging and provocative read. Funny too. What inspired the idea to transport Lenin through time in Rip Van Winkle-like fashion?

Being born and raised in the old Soviet Union, I grew up in the shadows of Lenin and Stalin. I prominently featured the latter in my previous novel My Life at First Try. Now, it was time for the former. They were friends and rivals back then, so I decided it’s time for them come together to a computer near me and then to books near you. END_OF_DOCUMENT_TOKEN_TO_BE_REPLACED

Mark Budman: “Lenin: Red, White and Blue” from a Novel in Progress

They brought Lenin to what looked like a hospital room and a female doctor in her mid thirties did a physical. A crowd of people looked on. Lenin didn’t resist. Deeply inside, he was curious. What would they find inside him? Would they explain the miracle of his aliveness? A scientific explanation would be ideal.

“Strange,” the doctor said. She was the only woman in the group. She would have looked like a distinguished physician from an advertising poster of a medical school, complete with a pristine white coat and gold-rimmed glasses, if her coat hadn’t been so short and her eyeliner so thick. One of the men, a uniformed cop with a major’s stars on his shoulder boards, had already touched her a few times, but she hadn’t complained.

“Strange,” she repeated, looking at the ultrasound results. “Most of the major internal organs such as liver and lungs are shrunk, but they are still present and functional.”

“So what?” a very large man in suit and tie said.  He introduced himself as the Politician-in-Charge. His bushy eyebrows and the prematurely wizened, square face made him look like Brezhnev, the Soviet leader of the eighties, and because of that his career probably hadn’t developed as well as he had hoped it would. “The organs shrink with time. Isn’t it so, Dr. Litvinova?”

“My balls don’t shrink with time,” the major said. “And my penis even grows with time. Wanna look, doctor?” END_OF_DOCUMENT_TOKEN_TO_BE_REPLACED