WIPs Conversation: Kevin Eze on His Work in Progress 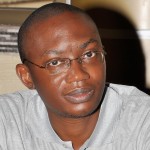 Kevin Eze, a Nigerian writer, is the author of the forthcoming novel The Peacekeeper’s Wife (Amalion Publishing, Fall 2014). His works have been anthologized in Writers, Writing on Conflict and War in Africa and Long Journeys: African Migrants on the Road. His stories have recently appeared in The Four Quarters Magazine and Outside In. He was one of the winners in the Africa Book Club Short Reads Competition in 2013. He writes in English and French Languages from Dakar, Senegal.

Kevin, Mali, the story, does an admirable job of relating the conflict and turmoil in Mali, the country, through its narration, its characters, but, most of all, in its setting—a hospital where “(a)ll but two wings are closed due to fleeing personnel”…“rebuilt after a suicide bomber levelled the old maternity ward,” and where a “nurse would be driven crazy working in a hospital without towels or paper.” How did you decide to set the story in such a place?

A hospital in distress better captures the drama of the human condition in Mali at the height of the conflict. A hospital is a waiting place, a corridor of life. The Malian people were trapped in this tenuous corridor, like in a hospital, waiting, to either return home “restored” or be carried home for burial. The UN-backed French intervention was the doctor. But the hospital was also the irony of the Malian conflict: Malians sought refuge or treatment at the same hospital, irrespective of the color line.

The hospital takes in anyone, regardless of what side they fight on. As Amy says, “There are too many deaths. Brothers are fighting against brothers.” Racial and ethnic divides are central to the violence and upheaval in Mali as well as elsewhere in Africa. Is this one of the running themes found in other stories you’re putting together in your collection?

Before there was any writing, there was an astonishing love of books and reading that appeared to me more forcefully when I first left Nigeria to study in the Congo. I read Wizard of the Crow by Ngugi wa Thiong’o as a student of Philosophy and Humanities. The ethnic dimension of violence in Africa, as seen through the lens of Kenya, was not a running theme. But the ethnic tension that erupted dramatically during the 2007 elections still engage the international opinion. How can an African writer ignore the reality of ethnic divides—or the exploitation of it—today? Think of the Biafian war, the Rwandan genocide, the Liberian civil war, the Second Congo War, the Ivorian crisis, the struggle for land in the Guinea, the genocide in Darfur, the Sudan – South Sudan Border War, the Malian conflict, the mayhem in the Central African Republic—this is a mine of imagination for fiction in view of social change.

The story ends on an optimistic note. Amy, having tragically lost her daughter and then devoting herself to extended periods caring for others at the hospital, she returns to her village caring for Mariam, a surrogate daughter of sorts, while Keita spreads the good news of upcoming elections. And, finally, there’s the still-standing church and the story’s final words: Mali will get back on track. Would you say that last line is the sentiment of a journalist writing about the world as it is, or a fiction writer describing the world as it should be? Perhaps a little of both?

A little of both. The Malian conflict, like any conflict, is not a fatality; it will end someday, and then take another fifteen to twenty years to heal. The fact that presidential elections were held in Mali, despite the visible scars, was a significant sign of healing. Again, I was aiming at visionary literature, so it was important in my opinion to end on a positive note.

As referenced in Amadou Hampâté Bâ’s opening quote, much of traditional African storytelling and history has passed from one generation to the next solely by word of mouth. To what degree is that still the case, and what changes are occurring in Africa as far as the prevalence of narrative mediums such as publishing, filmmaking, etc?

Everybody in Africa has a story to tell. Much of this storytelling first takes place in the form of oral transmission. When Amadou Hampâté Bâ told the UNESCO that he “graduated from the university of under the baobab tree”, he raised the oral form to the status of a “university.” In addition to a living tradition, add the economy. In a continent where real purchasing power belongs to about 5% of the population, readership is still low though growing.  My publishers at Amalion Publishing soon will be releasing a book titled Wala bok ou l’histoire orale du hip hop au Sénégal (Wala bok or the oral history of hip hop in Senegal), which explores another vibrant expression of the oral tradition today.  The emergence of narrative mediums such as publishing and filmmaking in Africa is a proof of the vitality of the oral tradition. Nollywood and FESPACO have made a striking impression. In publishing, radio and newspapers play a primary role in book publicity. The African publishing industry will get better, which is why there are so many new African publishers coming out now.

Mali is part of a collection you’re putting together. Are the stories mostly set in West Africa or do they take readers all across the continent?

I have had the opportunity of travelling to and living in various parts of Africa. Therefore, the stories will take readers all across the continent. Nigeria is not South Africa; and the Congo is different from Senegal.

Do you have other creative projects in the works or upcoming?

My novel The Peacekeeper’s Wife will be released in English Language, hopefully, in 2014. In addition to exploring the shorter form, I’m simultaneously at work on a second novel on anti-Christian violence in Northern Nigeria.

What else than to thank everybody for reading and for their support.

Kevin Eze: “Mali,” from a Story Collection in Progress
Robyn Parnell: “The Assassin,” an Excerpt from Looking Up