WIPs Conversation: Sarah Seltzer on Her Work in Progress 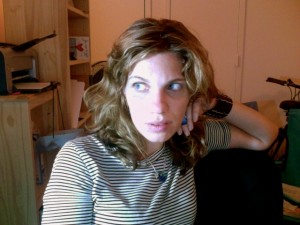 Sarah Marian Seltzer is a winner of the 2013 Lilith Fiction Prize, and has had fiction published in fwriction: Review, Blue Lyra Review, Joyland, and elsewhere. She received her MFA from Vermont College of Fine Arts, and is a journalist in New York City with nonfiction bylines in The Forward, XoJane, LA Review of Books, Vulture, The Hairpin, Ms. Magazine and The Nation, among many other places. Her novel-in-progress, “Joy, Somewhere in the City,” was awarded a grant from the Hadassah-Brandeis Institute. Find her on Twitter at @sarahmseltzer or on Tumblr at  sarahmarian.tumblr.com

Sarah, “After the Bar Mitzvah” finds Sharon on a high, basking in the praise and special attention coming her way after the huge success of “Camp Cameron,” which she planned in its entirety. Was the event (and what led up to it) arguably more important for her than her son?

One reading of Sharon’s behavior would say yes, it’s eclipsed her son. Perhaps the bar-mitzvah started out as a way to help Cam, but it morphed into this outlet for a talented woman who is otherwise unfulfilled. I’d also argue that there’s a second layer: Sharon realizes during the weekend that Cameron, who has himself been the major focus of her considerable energy, is getting older and won’t need her forever. He’s got his friends, his life, and his “becoming a man,” is adding to her sense of being unmoored.

I was inspired in part by the process of planning my own wedding. So much of my creative energy went into “writing” a narrative around the event: how it would go, and what each part would signify. Interestingly, I started writing fiction in earnest soon after I tied the knot.

Highlighted among Sharon’s mental list of the compliments she received is the unnamed photographer’s recognition of her as an “artiste.” Life at home with her husband Bernie seems a bit too staid, and she worries about becoming a “bar mitzvah matron,” so the photographer’s attractiveness and attention arouse her, and stir many moments of reflection. What role do you see the photographer playing in the story?

On a straightforward level, he’s an attractive younger man who knows how to push her buttons. Beyond that, he’s holding a literal lens up to her, and it’s more flattering than she’s used to, so she becomes seduceda by his vision of her. His hustle also echoes her younger self–an aspiring artist who works in a service industry to pay the bills, wooing wealthy clients. How much of his kindness to her, his flirtation, is an act? Sharon was a waitress at a top-end restaurant in her auditioning days, so she knows something about the game he’s playing. The question of his genuine intent vs. his self-interest haunts her because she knows from her own life that the answer might be very complex.

This story is part of your novel in stories, Joy Somewhere in the City. The collection is linked by Rina, who is mentioned briefly here as the classmate who serenaded Cameron with “Happy Birthday,” and “had trilled and belted in a way that made Sharon feel Rina would be among them someday, living the life that Sharon hadn’t.” Can you explain Rina’s character and how Joy Somewhere in the City revolves around her?

Rina grows up through an awkward adolescence, and dies tragically when she’s a young actress about to transition from a downtown play to Broadway. Sharon and Cameron both stay in her life, by the way. All the chapter-stories in “Joy, Somewhere in the City” revolve around Rina’s life and the enigma of her loss. We hear from her friends, her sister, her mom, and characters a few degrees more removed, all over a span of two decades.

What about the rest of the collection? Can you briefly describe what other stories readers will find?

Sure! A few of the more stand-alone sections have been published, although they’re all still evolving as part of the whole. “Disorder” is Rina’s sister Kat’s tale, and a key emotional anchor for the novel. “Empty Nest” tells the story of Sharon’s friend Laine’s marriage crumbling during Rina’s last days. It features a phone call between Sharon and Laine that calls back to “After the Bar-Mitzvah.” “In the Desert” and “Balcony” explore the impact of Rina’s death on her friends, as seen through their significant others’ eyes. All these are only five out of 16 or more chapters.

I envision the manuscript as a novel with a black hole at the center, like a donut hole: the hole is Rina’s consciousness. The structure is a way of considering, and evoking the way we think about someone after we’ve lost him or her. We see the departed one through an overlapping, shifting collection of all the memories shared by those who knew that person–but all the stories are colored by subjectivity and ego.

What stage is the manuscript? Are you seeking representation for it, or seeking out publishers?

I get so superstitious talking about this stuff! Right now, a few people are reading it, and I’ve already received the feedback to connect more dots, and write more stories, which is the best kind of constructive criticism you can get. It’s morphing more from “novel-in-stories” to a novel with “kaleidoscopic structure.” A Kaleidoscopic donut, if you will. I’m going to spend memorial day at a writing retreat at my MFA program, trying to bring a new draft to completion.

Do you have any other creative projects going these days?

I’m tooling around with a few stand-alone stories, and I write an occasional humor piece. If I had more time on my hands, my dream would be to play around with more reality-bending flash fiction and longer personal essays. I’m a journalist and I write mostly for the web, so I’m enticed by the idea of going more lyrical and untethering myself from traditional structures.

I’m thrilled to give this story a home. It was my very first story for my very first “packet” at my grad school, and it’s the first chapter in the novel, so it’s dear to my heart!

Read “After the Bar Mitzvah,” a story from Joy Somewhere in the City, Sarah Seltzer’s novel in stories.

Sarah Seltzer: “After the Bar Mitzvah” from Joy Somewhere in the City, a Novel in Stories
Harold Jaffe: An Excerpt from Induced Coma