WIPs Conversation: Stephanie Dickinson on Her Work in Progress 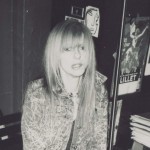 Stephanie Dickinson, raised on an Iowa farm, now lives in New York City. Her novel Half Girl (winner of the Hackney Award given by Birmingham-Southern) is published by Spuyten Duyvil.  Corn Goddess (poems),  Road of Five Churches (stories) and Straight Up and No Sky There (stories) are available from Rain Mountain Press. Her story “A Lynching in Stereoscope” was reprinted in Best American Nonrequired Reading and “Dalloway and Lucky Seven” and “Love City” in New Stories from the South, Best of 2008 and 2009. She is the winner of New Delta Review’s 2011 Matt Clark Fiction prize judged by Susan Straight. Her Port Authority Orchids was a 2012 finalist for the Starcherone Book Prize for Innovative Fiction.

Thanks for sharing this chapter with WIPs, Stephanie. It’s powerful and haunting. How did this novel evolve?

On July 26, 2006, Jennifer Moore, age 18, was abducted after a night of underage drinking and taken by small-time pimp, Draymond Coleman, to a seedy Weehawken hotel room that he shared with his prostitute/girlfriend, 20-year-old Krystal Riordan. During the early morning hours, Jennifer was raped and strangled by Coleman, while Riordan looked on.  The entire evening had been one of poor judgment that began when Jennifer’s friend drove them in her mother’s car to Manhattan from New Jersey, to go clubbing. The girls parked in a No Standing Zone and when they returned, discovered the car had been towed. The Impound would not release the car to the intoxicated girls. Jennifer’s friend passed out and EMS spirited her off in an ambulance to St. Vincent’s Hospital. Jennifer, in her white mini and black halter, walked off into the night and ended up on West Side Highway with Coleman stalking her.

END_OF_DOCUMENT_TOKEN_TO_BE_REPLACED

Stephanie Dickinson: “No Man’s Land” –A chapter from Love Highway, a Novel-in-progress

They’d taken Danielle barely breathing, and zipped her into a duffel bag and lugged her down the steps, stopping on the landing to rest, then dropping the bag like it was filled with rocks, not an injured girl. So little air left in her lungs they thought she’d died but she’d been a runner and knew how to pace herself. She could smell the dumpster’s metal sides, the rustiness mixing with the vegetable mulch of rinds and tomato skins and egg shells and sour cottage cheese and Tampax that had been inside another girl’s body. She was somewhere no one wanted to be zipped into a duffel bag, and heaved into a dumpster. They’d drawn her knees up to her chest; they’d done that after she’d blacked out, after he’d pressed down on her neck with his thumbs. What had she done that made him so angry?

The sun heated the dumpster; it felt like the sun truly was beating. Not much oxygen, but there were side panels made of mesh and Danielle could draw bits of air through them. All the garbage must be trying to breathe too. This must be what little Joey had felt. She’d met him at Farm Sanctuary during her internship. Joey, she said aloud. He wouldn’t leave her like Jon had. But that was okay. Once she enrolled in Rutgers, once she sat in her classes there would be people to meet. No reason to look back. She’d fallen in love with Joey, the lamb’s white fleece, spotted black on his legs and around his nose. Joey had been found alongside a highway, limping tiredly with a leg wound, unable to lift his head. A passerby stopped and brought him to Farm Sanctuary where Danielle assisted, with changing his bandages and feeding him from a milk bottle. There was so much light in Joey’s large eyes, and he always seemed to be smiling.

END_OF_DOCUMENT_TOKEN_TO_BE_REPLACED

WIPs Conversation: Brian Mihok on His Work in Progress 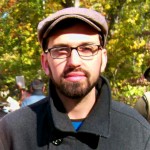 Mihok’s work has appeared or is forthcoming in Vol. 1 Brooklyn, Necessary Fiction, Hobart, 1913 and elsewhere. His novel The Quantum Manual of Style will be released in February 2013 by Aqueous Books. He co-edits matchbook, a journal of indeterminate prose.

Brian, The Quantum Manual of Style is quite a unique novel, with its manual-like style guide and hypothetical teaching examples woven into the broader narrative. What inspired such a construction? Do you have a background in science? In quantum mechanics?

It started with two unrelated ideas. I had just moved to Buffalo and because I didn’t know anyone other than my girlfriend, who was in grad school at the time, I was afforded a lot of time to read and write. She would come home late and do homework until she went to bed so it was like being in love with someone who is actually out of town. Still, she brought home all these style guides, APA, MLA, whatever-A. Big fat guidebooks to teach a student the relatively unimportant yet technical details of adhering to expected academic usage. The books would sit there during the day and stare at me long enough until I opened them up and flipped through. At some point it occurred to me that it might be interesting to see a book of fiction that looked like one of them. Something kind of ridiculous and over-the-top. Something that purported to give simple rules to simple problems, but was really ideologically a mess of ideas and reasons and examples. That was one idea.

END_OF_DOCUMENT_TOKEN_TO_BE_REPLACED

Brian Mihok: An Excerpt from The Quantum Manual of Style’s Section V: An Approach to Quantum Style

This final section examines quantum style in a broader sense: how the successful student of QS places herself in the very context of scientific and aesthetic discipline. Here the ideas of apartments, singularities and theories give way to mystery. That we have broken down mystery into its many parts (see Rule 4 in Section 1) does not steal away its power. In fact, it strengthens mystery’s ability to surprise, confuse, and titillate because it has completed the gauntlets of both emotion and intellect.

To approach this topic from a different angle, we may ask just how does one live successfully in adherence with quantum style? A simple question that breeches a most complex answer. We may, in substitute of this general one, ask a set of different, more directed questions: On a tour of a new apartment, how will I know a storage area can fit all my possessions? After a singularity, cement realities seem to generate at random—how can I be expected to stop crying? I seem to be especially vulnerable to keeping messy code, do I exist as a patch of dark matter, yet undiscovered or explainable? What if it is difficult for me to see symmetry in the universe? Is God hiding himself from me as a result? We ask these questions because we feel them. We are urged by them. But the successful student of quantum style is easily a blind explorer. To be blind is to be able to see matter in the darkest places. What a coincidence to have so many blind heroes: Zatoichi, Matt Murdock, Geordi LaForge, Max Carrados. To be blind is to be set free of trivial distraction.