WIPs Conversation: Michael Fischer on His Work in Progress 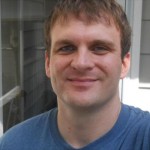 Michael Fischer’s fiction has appeared in Beloit Fiction Journal, Green Mountains Review, Bayou, and several other places. His manuscript is titled “Crybaby Lane,” and he is a Visiting Assistant Professor in English at Marshall University.

Michael, “Aim for the Moon” is part of a story cycle project of yours, the setting of which is “Mid-State Psychiatric.” What inspired the project?

In 1992, at the age of fourteen, I was committed to Dorothea Dix Hospital in Raleigh, North Carolina for a year-and-a-half. Mid-State is the fictional psychiatric hospital loosely based on my experiences at Dix in the early 90s and other state mental hospitals I’ve researched in the South.

Originally, I set the stories at Dix, but it didn’t work. The burden to “get the details right”—down to every street and ward name—suffocated my imagination and became a crutch to avoid brutal honesty. For instance, when the book was set at Dix, I would often say—in the most self-congratulatory way possible—“I must represent these people—my people—who don’t have a voice! I must help fight the battle against mental illness stigma!”

END_OF_DOCUMENT_TOKEN_TO_BE_REPLACED

Michael Fischer: “Aim for the Moon” from a Collection in Progress

AIM FOR THE MOON

In the hallway, on the other side of the nurse’s station door, Moose and Royce laugh. It’s your first and only bladder infection at Mid-State Psychiatric. The ceiling light burns your eyes. Moose, who’s been catheterized the most, said to stare into the bulb until Mrs. French finished. “Aim for the moon,” he said. The bulb’s the moon, and if you shoot it with your piss, you’ll be discharged. The game’s rules are simple: do x, attain freedom.

END_OF_DOCUMENT_TOKEN_TO_BE_REPLACED

WIPs Conversation: Harold Jaffe on His Work in Progress 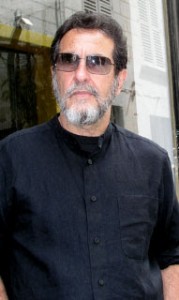 Harold Jaffe is the author of 20 books of fiction, docufiction, novels and essays, most recently OD, and forthcoming Revolutionary Brain. Numerous of Jaffe’s volumes have been translated into French, Spanish, Italian, German, Japanese, Turkish, and Serbo Croatian; and he has given interviews both in the US and abroad. Jaffe is editor-in-chief of Fiction International.

Hal, thanks for letting WIPs share excerpts from Othello Blues and Revolutionary Brain. Can you give a brief summary of these projects?

I subtitle Revolutionary Brain “essays and quasi-essays” because I do not adhere to genre codes. Several of the texts in the collection resemble fiction or docufiction. The theme of the collection describes a wide arc, but can reasonably be described as a demonstration of esthetics and culture theory that turn toward, not away, from our tormented globe.

RE Othello Blues, Shakespeare’s Othello (along with Iago, Cassio, and Desdemona) has been transposed into the mid-21st century. Othello, called Otis Crawford, Iago, and Cassio are blues musicians, the US is a shambles, and Otis divides his time between playing Mississippi delta blues and living them as a fighting member of the Steve Biko Identity, a social activist group comprised of poor people of color. The language of Othello Blues is a precisely pitched inner-city vernacular embellished with blues lyrics, most of which are invented by the ever virulent Iago. As in Shakespeare, Iago is the nominal villain, but in my version there is an eloquent passion in Iago’s hating which functions dialectically as a kind of resistance against cultural dictates.

END_OF_DOCUMENT_TOKEN_TO_BE_REPLACED

The skies are raining blackbirds.

fall from the sky round midnight in Mississippi state as we frenzy into year 2012.

Maya prophecies say this is the end-year; they do not mention Mississippi.

He’s an old guy. Call him Qa. He’s waiting it out alone.

He blows blues on his trombone.

Lies on the couch, dozes, dreams.

END_OF_DOCUMENT_TOKEN_TO_BE_REPLACED

WIPs Conversation: Sean Ennis on His Work in Progress

Sean Ennis is a Philadelphia, PA native now living in Water Valley, MS where he teaches for the University of Mississippi and the Gotham Writers’ Workshop.  His work has appeared in Tin House,  Crazyhorse, The Greensboro Review, LITnIMAGE, The Good Men Project, Talking Writing, Down and Out, and the Best New American Voices anthology.

Sean, I’ve read many of your wonderful short stories, and am happy to be introduced to your work here in your novel. How did it arise?

I wrote about a 100 pages from the point of view of the people who kidnapped the kids.  Maybe it had its moments, and maybe that work will inform what I’m writing now, but it’s a hard perspective to make sympathetic to readers, and at some point it felt necessary to explain why people would do horrible things.  It wasn’t a question I had a good answer to, or really wanted to delve into too much. It seemed to me that you would only murder and kidnap if you were genuinely ill, or an asshole.  Maybe it’s a lack of imagination on my part, but a point of view that might have to justify illness or plain old shitty behavior stopped being appealing to me.

The central drama of the story was initially tied up in my mind with things like events at Columbine High School, Virginia Tech, and unfortunately, there have been more incidents repeating this sort of violence, which made me feel even more that the point of view of the perpetrators was something I’m not interested in exploring. When these sorts of events felt like anomalies, they held some intrigue for me.  But these days, they just don’t. I guess I have pity for people who feel so lost that such drastic acts of violence feel necessary, but I stopped wanting to try to imagine what it was like to be them.

Also, between the original conception of the novel and now, my Claire and I have had a child of our own.  Obviously, that has a tendency to change a writer’s perspective a bit. Switching to the point of view of someone who lost a child in the event, and who found the violence of the event absurd, makes the project a lot more intelligible to me.  On some level, the issue of motive for the kidnapping is off the table.  A parent just wants their kid back.

END_OF_DOCUMENT_TOKEN_TO_BE_REPLACED

Sean Ennis: “Did I Miss Anything?” from a Novel-in-progress

DID I MISS ANYTHING?

I was about take roll in English 101, when one of my students burst into class, saying, “Two iguanas are fighting in the parking lot.  It’s amazing!”

This was Specialist T.J. Grier.  He was a nice kid with a big mouth, taking classes between tours in the Middle East.  He was someone who always had something to announce when he entered a room, who planned his arrival to be the last in the door so that everyone would listen, but his sincerity here was impossible to mistake.  He had seen something worth reporting on.

Half the class stood up and pulled out their phones.  It was a Friday afternoon.  I sighed and said, “Bring your notebooks and a pen.  You will be writing about this.”

The very smart students and the very stoned students were confused, but the rest were happy for a change of pace.  I was planning on having them free-write about the upcoming Chinese Moon landing, but this would do.

I ushered them out of the classroom, across the courtyard, and into the faculty parking lot.  Sure enough, there was a small crowd gathering around two lizards each about a foot and a half in length, hissing and puffing themselves up.  They danced around each other, grappled for a split second, and then released.  One of the lizards tossed the other under a parked car, but it emerged unfazed, and the crowd cheered.